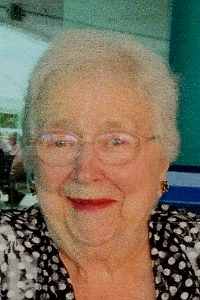 Martha M. (Catenelli) Cutillo, age 91, of Sarasota, Florida, formerly of Mansfield, passed away peacefully, in the presence of her loving family on Wednesday, December 1, 2021 at the Lakewood Ranch Medical Center. She was the beloved wife of the late Joseph M. Cutillo, Sr., to whom she was wed for nearly sixty years at the time of his death on September 29, 2009.

Born in Taunton, MA on May 10, 1930, she was a loving daughter of the late Pacifico and Celsa (Battisti) Catenelli.

Martha grew up in Taunton and was a graduate of Taunton High School. A resident of Florida for the past four years, she had formerly made her home in Mansfield for over sixty-five years and prior to retiring had worked as a bookkeeper for over twenty years at the former Old Colony Motors in Mansfield.

Martha’s family was the essence of her life and she was ever-so-proud of her children and grandchildren. She was a communicant of Saint Mary’s Church in Mansfield and an active member of the Catholic Women’s Club. Martha was a founding member of the “Poker Ladies” and also a member of the Stock Club.

Mrs. Cutillo was an avid reader and liked staying up on current events. She enjoyed watching the News, Jeopardy and will always be remembered as an outstanding cook and baker

She is survived by her devoted children: Anice O’Connor of Johnston, RI, who was predeceased by her husband Dennis O’Connor, Joseph Cutillo, Jr. and his wife Judy of Mansfield and Elena DeGirolamo and her husband Greg of Mount Pleasant, SC. She was the cherished grandmother of Celsa Cutillo, Carli DeGirolamo and the late Alicia Cutillo. She was the dear sister of the late Carla Urbinati and is also survived by her loving nieces and nephews.

Her funeral service will be held on Friday, December 10th at 11:00 A.M. at the Sherman & Jackson Funeral Home. Burial will follow at Saint Mary’s Cemetery in Mansfield.

In lieu of flowers, donations in Martha’s memory may be made to Saint Mary’s Church Catholic Women’s Club, 330 Pratt Street, Mansfield, MA 02048.

To send her family a message of condolence, please visit www.shermanjackson.com